We are thrilled to welcome Ana Croger and Clay Dawson to the McDonald’s Brisbane Marathon team as our 2019 event ambassadors.  Read here about who they are and why they share our common love…running.

As a busy mother of 3 and a lawyer Ana (pictured) started running 6 years ago after her youngest daughter was born. Initially Ana’s motivation was to lose weight after having 3 children, but like most runners, her hobby quickly became her passion, her release and an integral part of her life. Ana has clocked up an impressive international race list with marathons and ultras all over the world including Tokyo, London, Berlin and New York marathons, The North Face Hong Kong and Ultra Trail Serra da Freita in Portugal. Her personal best runs in both the half marathon and marathon (a Boston Qualifier) have both been in her home state at the Sunshine Coast Marathon. Ana loves track, trail and road running and participates in anything from 5km to 100km events. Ana is frequently involved in recreational running events in Queensland and Australia and is passionate about motivating and encouraging others to start running and dream big! 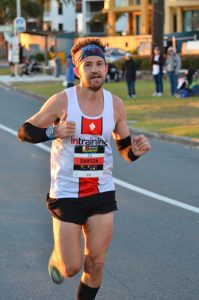 Clay is a father of 1 who works as a Visual Art Teacher at Rosewood State High School.  He stumbled into running relatively late in life (at 37, he’s been in the sport for 10 years) and weighed 120+kgs, nearly double what is he today.  He decided to ‘try out’ fitness during a school holiday and chose the  challenge of running.

With no GPS, watch, running shoes, sweat wicking shirts, or any modern ‘comforts’ he got into a habit of ‘purifying the mind’ by jogging daily. There was no training routine, races or even running buddies for a long time. The weight dropped, and the running bug bit.  In terms of racing, this kicked off whilst Clay was on a teacher-exchange in Canada,  when some friends noticed that he ‘ran a bit’ and asked him to join them in a team multi-sport event. He ran well, and a curiosity was born that saw him come home, seek out the sport more seriously – and (fortunately) find some success!  He has gone on to place and win in many marathon events including the 7 Sunshine Coast Marathon.

He continues to find joy in running for the purest reasons, sharing his love of the sport, and most importantly elongating the time he gets to spend with his wife and son.